Some Words for David McCullough's Biographer 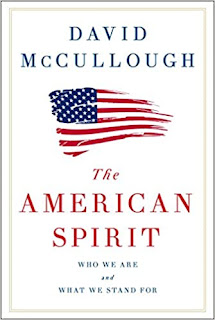 Several years ago I had the chance to interview David McCullough. Like many other Americans, I had long been under the spell of his voice and his books. I knew I would need to rein in my desire to listen to him for—oh, hours. So I promised him I would ask just five questions, and ended up asking only four.

As well-versed as he was in giving interviews, the last one took him by surprise.

Of all the people he had written about, I asked him, whom would he like to write the story of David McCullough?

No one had ever asked him that before, he told me. But he had a ready candidate: the 19th-century British writer Anthony Trollope. “He’s really good,” David said—and then remembered he hadn’t written about him. He paused for a few moments and then announced his choice.

“She was a wonderful writer, a good judge of people, and would have been a wonderful novelist,” he said. “She was pretty judgmental, but I guess I can take that.” He added jokingly, “I’d tell her to go easy.”

“She” was Abigail Adams.

Instantly I found myself thinking, Oh, what I wouldn’t give to be Abigail Adams.

We will, of course, never know what words this determined woman, whose correspondence with her husband David McCullough held in his hands when he was researching John Adams, might have brought to his biography. But here are some words from my interview that Abigail might have approved of—thoughts David McCullough shared that help to illustrate why he was, as The New York Times described him, a “spellbinding author.”

“I don’t think of myself as a historian or biographer.” Surprising words, don’t you think, for a writer whose histories and biographies earned him two Pulitzers (Truman, John Adams) and two National Book Awards (The Path Between the Seas, Mornings on Horseback)? But then he explained:

“I’m a writer who’s chosen to write about real people, and events that really happened.” He viewed history as his “terrain.”

“It was a particularly powerful summons, especially for young people. It affected my wife and me very much.” The summons was from John F. Kennedy, who in his 1961 Inaugural Address famously exhorted Americans to “ask what you can do for your country.”

Eventually, he would receive the Presidential Medal of Freedom for what he did for his country: helping readers bear witness to its history through those “events that really happened.” But first he worked for the U.S. Information Agency.

(These many years later, on the weekend that David McCullough passed away, there was a second, unexpected intersection with JFK. That Sunday, Caroline Kennedy was on the Pacific island of Guadalcanal in her role as US ambassador to Australia. She was marking the 80th anniversary of the World War II battle her father famously fought in as captain of the PT-109 torpedo boat.)

“Studying painting helps me to observe more closely.” So close was the juxtaposition of painting and writing for David McCullough that he sometimes captured in watercolor a setting he was writing about. It’s also why he was particular about certain prepositions: “When I write, I work in a book, not on it,” he told me—just as you do a painting.

“They were not perfect—perfect and human are contradictory. Nor did what they achieve result in perfection, especially when declaring all men to be created equal.”  David was referring, of course, to Adams, Jefferson, and the others who hammered out the Declaration of Independence and the path this country would take. He continued:

“What they did was to give us the ideal to strive for. They didn’t attain equality. But that doesn’t mean we shouldn't keep trying. Each generation of Americans tries to carry the torch of that ideal.”

Somehow it seemed an easier torch to carry when we knew David McCullough was among us, his words and his voice there to ground us.

Oh, what I wouldn't give to have asked him more questions.