Whatever gifts President Obama may be bringing to his hosts in Cuba this week, it’s pretty certain that he’s not giving them one of the handwritten copies of Lincoln’s Gettysburg Address. And yet, in a roundabout way, America has Cuba to thank for it. 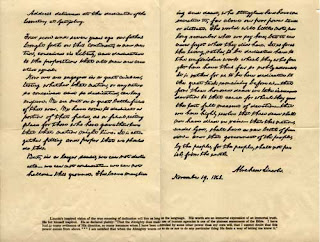 Lincoln wrote five copies of the Gettysburg Address that we know of, and not all of them before the dedication ceremony at Gettysburg on November 19, 1863. In fact, the last one that Lincoln wrote was a kind of do-over, in March 1864. A Colonel Alexander Bliss was collecting manuscripts for a facsimile volume of Autograph Leaves of Our Country’s Authors and wanted the Gettysburg Address to be among them. But alas, the first version Lincoln sent was missing a signature and a heading, among other elements, so would he mind penning another?

The ever-patient president obliged (proceeds from the book were going to a charitable organization to help the Union soldiers). Not only did he sign it but dated it, as well. This one made the cut for Bliss’s book.

Bliss’s descendants sold Lincoln’s original at auction in New York City, in 1949. A former Ambassador to the United States purchased it. His name was Oscar B. Cintas, and he was a businessman from Havana, Cuba.

When he died, he willed that the copy become the property of the people of the United States. The aptly named Bliss Copy of Lincoln’s Gettysburg Address now resides in the Lincoln Room of the White House.
Posted by mim harrison at 2:33 PM No comments: