If the story in the New York Times a few weeks ago is any indication, cursive writing might just be making a comeback, modest though it may be.

Contrary to what those who shun, eschew, lament, rail against, and run from cursive might think, the word does not derive from “curse.” But the running from is actually close. “Cursive” is from the Latin currere, to run. Letters in cursive writing flow, or run, together.

I think we should seriously consider a cursive revival. I say this even though my own cursive writing is cacographic—a fancy way of saying borderline illegible.

It’s not because I think that people will always have to sign their name the way we do now; I doubt that we will. It’s because cursive can be a potent tool when you're seeking transparency.

“The world will little note, nor long remember what we say here,” intoned President Abraham Lincoln at the memorial service for Union soldiers on November 19, 1863, “but it can never forget what they did here.”

Lincoln was right on the second point but wrong on the first. We do, indeed, remember what Lincoln said at Gettysburg. In fact, the Gettysburg Address is set in stone on one wall of the Lincoln Memorial.

But is that really what he said that day?

The reporters who were there didn’t get it right. It’s not that Lincoln talked fast, but he talked short: a mere 270-odd words in under three minutes. Nobody was expecting that.

But while we may not know verbatim what Lincoln said, we do know what he wrote in his own hand at various times, and for different reasons. Five extant versions of the Gettysburg Address demonstrate Lincoln’s neat, highly legible cursive. 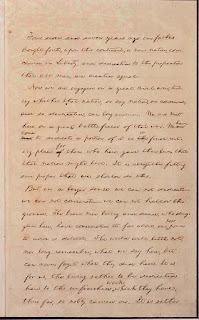 Therein lies my argument for why we should learn how to write cursive: so we will know how to read it.

Source documents like Lincoln’s five versions of the Gettysburg Address allow us to see what Lincoln really wrote, and by extension, what he was thinking at the time. It’s the same with Jefferson and the draft of the Declaration of Independence that contains the 80-plus edits of John Adams and Benjamin Franklin.

And with JFK, whose determination to put Americans on the moon was in his mind well before his galvanzing, "We choose to go the moon" speech at Rice University in 1962. In gathering his thoughts for topics for his 1961 Inaugural Address, the first word Kennedy scrawled on the front of an envelope was "space."

So let’s resolve this year to keep cursive alive as a way to more fully partake of our country's past. The ability to literally read our history through the hands of some of those who made it means we better understand what they were seeking.

That kind of truth without filter is a powerful tool to possess. Let's run with it.

Posted by mim harrison at 9:50 AM No comments: